I wish I had a dollar for everytime I heard that Shopify PageSpeed Score is only in the 20’s, how do I raise that?  Here is a trick that will help you score consistently in the 90’s and using this technique will make all your clients happy as well.  Yes, Shopify put in a PageSpeed score and it is based off of Google Lightspeed. Optimizing the web performance of Shopify these days has gotten trickier, but it is for the better I assure you.

It’s not even officially in the W3C spec yet, but it’s supported by most major browsers – and doesn’t hurt the rest – it is measured and recommended by Google’s PageSpeed Insights tool, which impacts your SEO rankings. In short – it’s a huge win for developers and Shopify partners who are always looking for new ways to reduce the load times of their clients’ stores, helping improve their on site conversion rate and drive revenue for the business.

It’s a great thing to do, which has a noticeable and measurable impact on the website’s performance. Here’s how you can do it in your shopify store:

Start by finding the hero image section in the theme. It’s possible it may be in the top-level theme settings, but more commonly it’ll be its own standalone section. liquid file.

Sometimes it’s a section, either being called directly, aka a static section, like this:

Or it’ll be a dynamically added section that can be added, re-arranged, or removed from the homepage through the Customizer. In this case, I recommend spinning off a new version.

The section should look something like this and contains its own {% schema %} data. Start looking down the code and find where the image is being rendered. 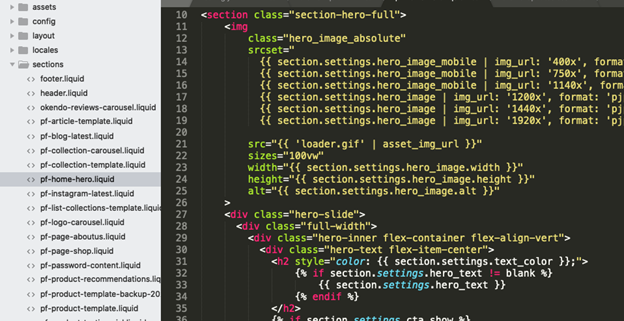 Now – we’re going to add a new HTML tag at the top of the file – pulling in the same image which will be loaded into the hero image or the first slide of a carousel.

You can read about these new tag features here. Hopefully, you’re already responsively sizing your hero image, so you can use the identical srcset and sizes attributes in the corresponding imagesrcset and imagesizes attribute on the <link>.

Now for the magic. You might have been wondering how we’re going to get the link tag, which needs to pull from the variables stored in the section scope, into the <head> of the document, way before the section is shown?

Fortunately, Liquid works great. Add a *** before and after the link tag, and then we’ll output the section in the <head>, but capturing it as a variable, then strip out the link and leave that in the <head>, and recombine the remaining parts and output that in the <body> where the hero image should be displayed.

Now, in the <head> tag in the theme.liquid layout, just capture, split, and output the middle portion of the section:

Then, further down, where the content is rendered, add a conditional tag and output the remaining parts to include the hero image on the homepage only:

I’d recommend adding the same conditional logic to the part captured in the <head> as well. 🙂

The reason for the three part approach is that Shopify automatically wraps sections in a div which needs to be closed, so by capturing the part before the first *** we get the <div id=”shopify-section-{{ section.handle }}” class=”shopify-section {{ section.classes }}”> opening tag.

And there ya have it! You can also use essentially this same method to preload the primary image on product pages, collection pages, and blog and article pages. In those cases, it’s often even easier since the image isn’t stored in a section, but attached to the main object of the template, like Product.featured_image, or article.image, so no splitting is necessary.

Thanks for reading! Hope you learned something new, happy optimizing!

** This is a rewrite of a post written by  Cameron Shaw.

This site uses Akismet to reduce spam. Learn how your comment data is processed.

Cutting edge technology is used in all our themes and apps.

Where cutting edge Shopify is created.

Enter your email address to get exclusive deals.
Exclusive only to subscribers.

You have successfully subscribed to the newsletter

There was an error while trying to send your request. Please try again.